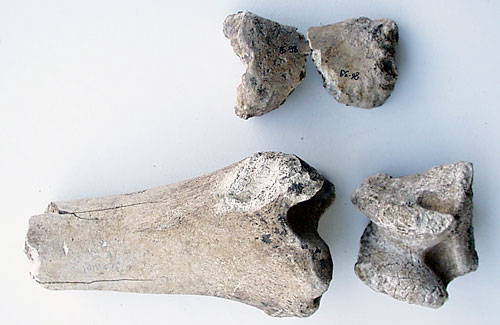 Abstract
Remains of a Roman settlement were discovered in 1972 south-east of Mörfelden, Hesse. During four excavation campaigns (1978, 1980, 1997-1998) settlement remains with traces of buildings, pits and wells were recorded. The structure of the buildings points towards a civilian Roman settlement, a so-called Villa rustica, which was probably related to the provisioning of the close-by castellum at Groß-Gerau. According to the pottery the settlement was occupied during the 3rd and 4th century AD. In this time period the settlement in the Rhine-Main area shifted from Roman to Alamannic people. Therefore, it is possible that a former Roman building was re-inhabited by Alamannic people or that the building was a Roman enclave within an Alamannic settlement area. Apart from roof slate, bricks and metal, the finds recovered in 1998 consisted also of bones. In this report, these are archaeozoologically and taphonomically analysed to gain further information about the nature of the settlement.