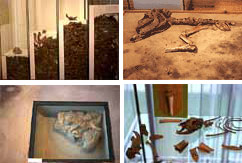 Exhibition in the Focke-Museum Bremen, Germany, 7. 3. – 14. 5. 2000 Within this exhibition bones from the excavations Bremen-Arsten and Bremen-Habenhausen 1983 were exhibited. The different representation and economic value of the species (horse, pig, cattle, sheep / goat) was highlighted by separating them in columns showing the percentage of each species found (figure 1). The special relationship of the Saxons to horses was demonstrated through a horse burial (figure 2). A well from Bremen-Huchting contained the skull of a horse and other slaughtering refuse (figure 3). In the background of figure 4 an early medieval lire with a string holder made of bone can be seen (TAMBOER 1999, 60-61, 74). It was reconstructed after an artefact from the frisian terp mound Teerns (The Netherlands).