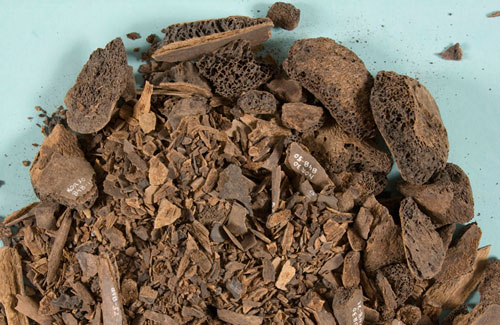 Abstract
In 2007, prior to the construction of a bypass at Norden, Rural District of Aurich, East Frisia, two Early Medieval work sites and/or iron-smelting sites, which were probably only temporally occupied, were excavated there. Pottery finds date them to the 9th and 10th centuries AD. At iron-smelting site 7:46, the remains of a smelting furnace were discovered as well as the waste dumps of several others. Some two dozen round waterholes and finds of slag suggest that site “terp 30” was also connected with iron smelting. Both sites are situated in the “Süder Hooker”, an interesting area at the transition zone of the coastal marshland and the higher, dry and sandy land of the “geest”. Here we find a remarkable number of Early Medieval sites.
Six pits in the area of terp 30 yielded animal bones, 165 of which allowed species identification. Evident are cattle, sheep / goat and pig. The most interesting aspect of this assemblage is its taphonomy. While most bones are in a very bad state of preservation due to soil processes, a smaller part is calcined and has been exposed to temperatures over 800 °C for considerable time. Remarkable is that most of the calcined bones belong to sheep or goat, while cattle bones are mainly unburnt.