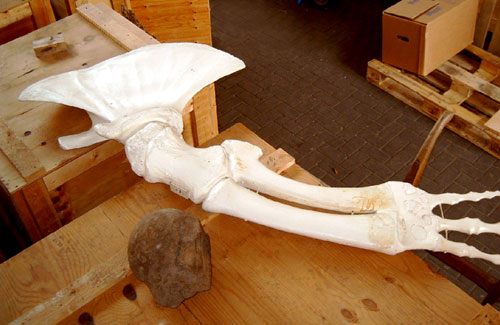 [A Whale Bone Find from the Teerhof in Bremen]

Abstract
During excavations on the Teehof (tar yard), a peninsula between the river Weser and its tributary the Small Weser, in 2007 archaeologists uncovered a large almost spherical bone fragment of approximately 290 mm diameter. The bone was found in the area of the Pipe, a part of the medieval defense ditch of Bremen. Archäological and historical evidence place the find in the time period between 1660 and 1709.
The bone could be identified as ball joint from the humerus of a whale, but species identification posed problems. According to morphological and osteometrical data the most likely species is the North Atlantic Right Whale (Eubalaena glacialis). The present article explains the archaeozoological and taphonomical data. Subsequently, different scenarios for the deposition of the unusual find in Bremen are discussed by means of zoological and historical data. The most likely hypothesis is the provenance from one of the Arctic whaling journeys, which are historically evident for Bremen since 1653.