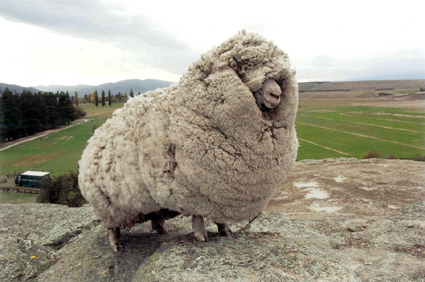 Abstract
The research project Textile Revolution integrates studies on the introduction and spreading of the woolly sheep and wool usage from different scientific fields. Past herd structures of domesticates are investigated on the basis of bone finds; spinning tools and textile-related finds provide information on fabric production, and herding-related vegetation disturbances are investigated using pollen data. The investigated area spans from the Zagros Mountains in the south-east to the Great Hungarian Plain in the north-west and the time period between 6500 – 1500 BC is covered.

Abstract
Within the research group „The Textile Revolution“, part of the Topoi-Project in Berlin, the archaeozoological sub-project was devoted to the process of the major economic shift in sheep husbandry that involved the change of the exploitation focus of sheep from meat and milk towards fibre production and the transformation of sheep with a hairy coat to those with a woolly fleece. Central to the research was the development of a database into which the results of a comprehensive literature research in archaeozoological publications and unpublished raw data of sites in Southeast Europe and Southwest Asia spanning a time frame from 7000 BC to 1500 BC have been recorded. The data have been collected from 548 publications published between 1952 and 2015. The present state of the database (29.7.2019) published here combines data of 401 settlement sites from 18 countries, 296 of which are located in SE-Europe and 105 in SW-Asia. The database at present includes archaeozoological data of over 2,1 million identified mammal bones including 66.717 bones identified as Ovis aries. The osteometrical part of the collection contains more than 14.000 measurement data of sheep bones.

The original FileMaker Pro database is available on request from the author at info@knochenarbeit.de (the database will be a runtime version, working on most standard computer operating systems without requirement to install the program). 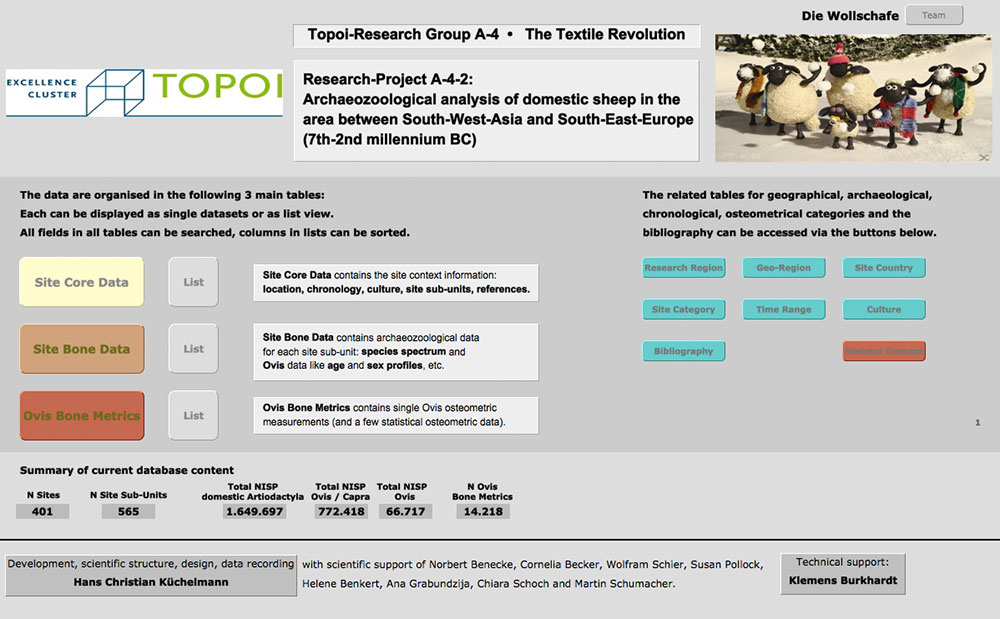 Abstract
This summarized and catalogued dataset was recorded and analyzed during the Topoi PhD Research Project (A-4-1-1) on Archaeological Evidence for Early Wool Exploitation in South-East and East Central Europe. It contains textile tools sampled within a site cluster that stretches accross the Pannonian Plain. The research study was focused on elucidating spatio-temporal and causal factors of the major changes in Eneolithic textile technologies, which might have been associated with raw fibre material innovation (Becker et al., 2014). The final Catalogue of Finds contains details on, collectively, 1048 archaeological objects classified as textile tools.

Abstract
The role of ancient pastoral activities is mostly reconstructed using pollen of secondary indicator species. Increased herding activities lead to declining forest canopy which is represented in the pollen diagram by the arboreal pollen sum. In this collection featured pollen values represent Plantago lanceolata, P. major/media, Rumex acetosa/acetosella, Polygonum aviculare and arboreal pollen sums. Charcoal data give evidence of past forest burning that may be related to human activities and geochemical data reflect soil erosion in the catchment of the respective sediment archive.

Abstract
The main objective of the study behind this dataset includes the reconstruction of the process of establishment of wool use as a regular raw material between the date of domestication of the sheep in the 8th millennium BC until the 3rd millennium BC. The end point of development is chosen according to research as the time in which wool was regularly processed for export (Crawford 1973), meaning the exploitation of the raw material exceeded any personal use.
Archaeological sources for investigation of wool use in ancient West Asia include direct and indirect evidence. Inambiguous evidence include organic remains of woolen textiles, preserved by exceptional conservation conditions and ancient texts mentioning the use of sheep for wool and the processing of wool for textiles.
The earliest examined woolen textile dated to the Majkop period about 3700-3200 BC (Shishlina et al. 2003) comes from the Caucasus. The first written sources that describe sheep as ‚wool sheep‘ are the archaic texts from Uruk (Green 1980), from the end of the 4th millennium BC. These dates prove that, at least in parts of the study area, from the 4th millennium BC wool baring sheep were used as a raw material supply for textile production. However, it also means that the developments and appropriation of new fiber domestication had to start before that. The period between the domestication of the sheep and the first proven textiles made from wool can be investigated only by inspecting indirect evidence of wool use. These include textile tools and textile imprints on ceramic sherds, which make the biggest portion of this dataset.
The main hypothesis behind this approach is that the technological innovation, such as the introduction of a new raw material, is recognizable in a large dataset of textile related archaeological objects. The uniformity in the production of textile tools, namely spindle whorls, can in some cases be explained by physical necessity, for example when using perforated shallow river pebbles, halved femoral heads or pottery shards. But uniformly produced complex forms of ceramic whorls propose social interactions and transfer of standardized knowledge and practice from person to person. The indications of wool use accumulate in the 4th millennium BC, but a long experimentation period which included small technological adjustment steps and changes was inevitable.